Emanuel Pârvu is in postproduction with his sophomore feature Mikado / Marocco, which he shot when Romania eased the Covid restrictions, from 26 July to 23 August 2020. The main character of the film is played by Șerban Pavlu, who also stared in Pârvu’s debut feature Meda or The Not So Bright Side of Things / Meda sau Partea nu prea fericită a lucrurilor (FamArt, 2017), which won the Hearts of Sarajevo for Best Director and Best Actor.

Cristi is in a relationship with Maria, a few years after his wife died of cancer. His teenage daughter Magda and her boyfriend Iulian both volunteer at a pediatric oncology hospital, where they go once a month to entertain sick children. One day, Magda offers a sick child the expensive necklace her father just bought her for her 17th birthday. Cristi refuses to believe Magda, but when she proves her innocence, everything changes. He feels ashamed and guilty for not trusting his daughter but is also incapable to admit he was wrong, so he lashes out at the hospital. Iulian’s mother, a nurse at the hospital, dies of a heart attack, perhaps provoked by Cristi’s threats.

Miruna Berescu is producing through FamArt Association in coproduction with Bogdan George Apetr,i as well as by Teodor Mirea through Natura Party. Cristina Mitea is the executive producer.

The budget is 780,000 EUR, Miruna Berescu told FNE. She added that they are looking for an international coproducer for the postproduction stage.

The film was shot entirely in Bucharest by Silviu Stavilă, whose credits include Niki and Flo / Niki și Flo (2003) directed by Lucian Pintilie and produced by Filmex. 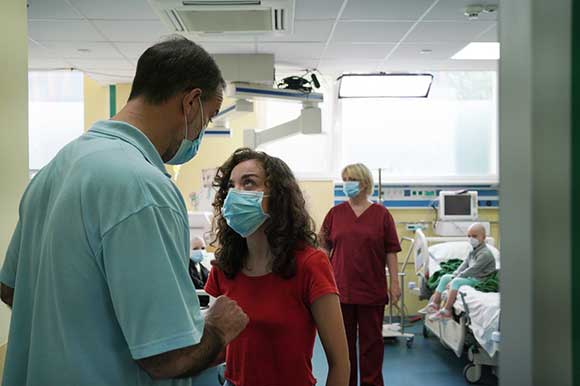